Over the years I have attended many performances of Shakespeare’s romantic classic, “Romeo +Juliet”- in London, New York and of course, more locally in Ontario’s own Stratford Festival, in the bucolic Ontario town of Stratford.

And who can forget the many film versions of ”Romeo and Juliet”- the 1968 Franco Zeffirelli version starring Olivia Hussey and Leonard Whiting, and the more contemporary 1996 American version directed by Baz Luhrmann starring a very young pre Homeland Claire Danes and Leonardo DiCaprio.

But brace yourselves, theatre-goers and Bard Buffs, the most believably romantic and hence tragic love story of “Romeo + Juliet” is being performed outdoors this summer in the beautiful Greek Stage in Scarborough’s Guild Park.

The setting is naturally magical and unique.

The open-air theatre, situated among 88 acres of forest, gardens, lawns and woodland trails ( the Guild Inn) is modeled after the Ancient Greeks- with its awe-inspiring eight columns and Corinthian capitals, with soaring arches joining the columns.

But as Shakespeare’s Hamlet once noted,” I’ll have grounds-More relative than this—the play’s the thing.”

Notwithstanding the beautiful setting, we come for the play. And more specifically, the relationship between Romeo and Juliet.

If there is no chemistry between the two leads, no amount of stagecraft, will redeem this classic play.

Fortunately, Jovan Kocic as Romeo and Lindsey Middleton as Juliet are marvelous as the star-crossed lovers, set in a contemporary modern England.

Their chemistry is so natural, heartfelt and palpable. Their youthful passion and love infuse the whole production.

My favourite scene is the famous balcony scene between the two young lovers. First love is so unique, memorable, awkward, funny and a bit scary. The two lovers brilliantly portray all these emotions in this pivotal scene.

You can tell many members of the audience, myself included, identified with the feelings of their first love, bursting and blossoming forth, as we were also briefly transported back to our own first never to forgotten first experiences.

It seems that Kocic and Middleton, both graduates of the University of Toronto/Sheridan theatre program, knew each other as students and were close friends as well.

The warmth of their friendship is evident in every scene and hence the tragedy of their love, that much more poignant.

In an interview, Jovan Kocic based his portrayal of Romeo on his own concept of loyalty. Romeo’s loyalty to his family and of course his conflicting loyalty to his lover, Juliet. This conflict drives the play. (see photo with Romeo himself).

On the other hand, Lindsey Middleton’s Juliet succeeds because Ms. Middleton, a very strong and self-assured person, possesses the strength of character to portray Juliet as honest, open, innocent and vulnerable. A very difficult theatrical feat.

The director, Jamie Robinson, wisely sets this play in contemporary England. His direction and his theatrical choices are bang on.

The genius of Shakespeare is that his language and romantic themes strangely resonate with Romeo’s contemporary “English lad chic” and the charming, funny Montaigne boys.

The whole cast is uniformly excellent. As is the whole production- from costumes to lighting design.

This play is well worth the trip to Scarborough’s lovely Guild Park. 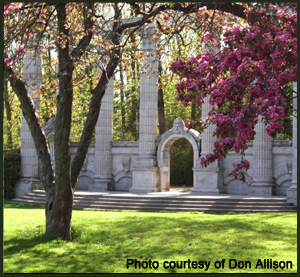