Whenever I go back to my roots, Westmount, Quebec ( I am a third generation bilingual Anglophone-Quebecois-“ caline de bine-eh!”), I always head back to Chez Nick, the best little diner in all of Canada.

Chez Nick was founded in 1920 by Nick Alevisatos. It was owned and operated by Nick until 1970. Then it was owned and managed by Nick’s son, Tom, until 1995, when it was sold to the current owner and operator, Rob Callard, a family friend and former dishwasher, waiter and manager of Chez Nick under quite extraordinary circumstances. More about Rob later on in this piece.

Chez Nick is considered the oldest diner/restaurant in Montreal that is still in its original location, 1377 Greene Avenue, in lower Westmount.

There are many good reasons why Chez Nick has survived and prospered all these years. Great food, reasonably priced. Very professional, personal and attentive service by long time knowledgeable staff. And a very friendly, family, neighborhood atmosphere.

But in addition, there are the personal touches that make this place such a singular and unique place. I lived in Westmount in the 60s and part of the early 70s. Just up the street on Mountain and Montrose. I recall with fondness as a young kid, on a Saturday, after shopping with my mom at the local grocery on Greene or buying shoes at Tony’s Shoes (now known as Chaussures Tony’s Shoes) on the Greene Avenue strip ( Tony’s is also still in business after 75 odd years, by the way), heading over to Nick’s for lunch for burgers and fries and chocolate milkshakes.

In those days, I had the honor of knowing Nick, or to us kids, “Uncle Nick”. Nick and the staff knew all the customers’ names, especially the regulars. And their children’s names. Nick always came over to our table and kibitzed with my mom and me. And always gave us extra fries and gravy- gratis. Okay, probably not the healthiest food choices in those days.

I also recall with fond nostalgia, a little later in life, as a high school student, trudging home on those bitterly cold winter afternoons from Westmount High, ( located further south on St. Catherine Street), stopping with my friends at Nick’s for fries and a hot chocolate. Prior to making that final heroic ascent up the Mountain. To my home. Three long vertical blocks away. If memory serves, I guess I was a bit of a drama queen in those days. And surprisingly, notwithstanding my addiction to Nick’s fries- not a chunky one at that.

For decades, Chez Nick was your archetypal deli/diner. Serving tons of eggs, mounds of bacon and large sides of home fries. For lunch- burgers and cheeseburgers and fries was usually the most popular order of the day. Nick’s was also known for its mouth-watering smoked meat sandwiches, with sour dill pickles and of course, its always fresh cut French fries with gravy.

Nick’s was the local “go to” place for meats and processed meats.

But in the 70s, the times, “they were a changin”. In 1970, Nick had given over the reins to his son, Tom. The infamous French language first Bill 101 came into being. And many English-speaking bankers, insurance execs, business people fled Westmount for Toronto, western Canada and the States. Taking their families. And their business. Times were tough for Nick’s and many English-speaking establishments on the Greene Avenue strip.

“For Sale”/”A Vendre” signs popped up like dandelions on every Westmount street.

Nick’s had to become Chez Nick and adapt or die.

And to its credit, Chez Nick, hunkered down. Worked doubly hard to retain its remaining English-speaking clientele.

Every day, my parents thought about picking up and moving to Toronto, Chicago, New York and Palm Beach. Great opportunities beckoned for my dad, who in those days, was well-known and respected as a very caring and compassionate obstetrician and gynecologist. But like many families, they stayed the course. Stayed in Westmount and sought comfort with their friends at neighborhood diners like Chez Nick.

In order to survive, Nick’s also reached out more aggressively to local businesses in the area and to the new immigrants to Westmount, – the upwardly mobile Jews, Greeks, Italians and the newly empowered French-speaking professionals, business people and government folk, who began rapidly occupying the stately Westmount manses.

What saved Chez Nick, was Tom deciding to go outside the family and choose a successor, Rob Callard, who had cut his teeth at the diner as a dishwasher, bus boy, then a hustling waiter during his university days, at Concordia University down the street.

Rob told me that he paid his way through “Uni” by busing and waiting tables at Chez Nick.

For Rob’s part, he viewed Tom as a mentor and a surrogate father. And Rob felt that he was treated like family.

Obviously, Rob’s work ethic and all-around good character, had left an impression with Tom. Because in the late 80s, the always astute Tom reached out to Rob and made him an offer that Rob could not refuse.

Tom convinced Rob to come back as manager for five years with an option to buy the restaurant at the end of the term. And to help Tom upgrade, revamp and modernize Chez Nick.

When Rob asked Tom, why he chose Rob to take over Nick’s, Tom replied that he remembered one summer when as a university student, Rob worked six weeks straight washing dishes with an arm in a cast as a result of a broken writst. And according to Tom, “ any person who could do that, has what it takes to run a restaurant.”

What a great story!

As Rob told me, he had little money in those days. But as a result of his experience as a waiter and then manager, he knew that Chez Nick, though a relatively small and contained business, was a viable business. So one week before the results of the 1995 Quebec referendum, Rob invested his life savings as a deposit and exercised his option to purchase Chez Nick.

Now that took some mighty big steel balls. A “Yes” vote for Quebec to separate from the rest of Canada and become independent, could have had disastrous economic and financial consequences for Quebec and for Canada. And clearly for Quebec businesses, both large and small.

Rob believed then, that people would still have to eat. Regardless.

Fortunately, for Canada, for Quebec, and for Rob and Chez Nick, the pro-Canada federalist “No” forces triumphed. But barely. Thanks to the “ethnics and money” in Quebec.

To Rob’s credit, he realized that for Chez Nick to survive and prosper into the twenty-first century, it had to revamp its menu while still retaining the diner’s character and charm. And become more healthy and bistro-like

A menu rich in salty, fatty, eggs and bacon, artery–clogging, burgers, fries, meats and processed meats, though very tasty and delicious did not have the same appeal to the new generation of young, active, family-oriented, and health-conscious Westmounters.

Also it was not to Rob and Chez Nick’s long term interests to unnecessarily shorten the lives of his long-term customers by serving them exclusively salty/fatty, but very tasty and plentiful food. LOL.

Over time, Rob gradually incorporated more healthy, fresh, made to order food on the menu. A review of today’s menu indicates that a whole page is devoted just to about 18 different salads. All served exclusively with 100% canola and olive oil. The most popular and exclusively vegetarian salads being Fresh Fruit salad and cottage cheese, Bruschetta and greens, Caprese salad, Metcalfe salad, Greek salad, Bennett Farm salad, Grains on Greens and Portobello Mushroom salad.

Recently I dropped into Chez Nick for Sunday Brunch. The place was packed. With truly a very interesting eclectic crowd of: long time regulars from the nearby luxury apartment buildings and Westmount Square ( some who looked vaguely familiar); young yuppie families, with several children in strollers and high chairs, all laughing and enjoying themselves; two or three hipster couples, ( who just looked they had rolled out of the sack after a night of partying and whatever); and a few students nursing their coffees as they texted on their iPhones, tapped away on their iPads. Or Tindered each other.

This Sunday, I eschewed the Grains and Greens salad for my favorite Greek Yogurt/fruit/granola/almonds, with a dash of honey Nick’s special. Washed down with bottomless cups of freshly-brewed heavenly coffee, that put all the competition- Starbucks, Second Cup, Tim Hortons and McDonalds, to shame.

I noted that Rob, the owner, greeted all the loyal customers, by name. Just like Uncle Nick.

It was great to be home again.

Kudos to Rob Callard for revitalizing this great Westmount and Montreal establishment. May this great institution survive another productive 100 years.

(note photos Rob Callard, the owner, and I, and current Chez Nick, the diner/bistro) 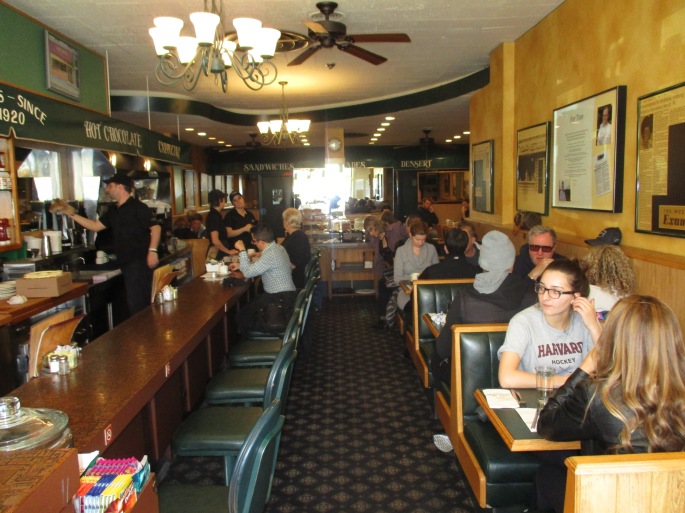 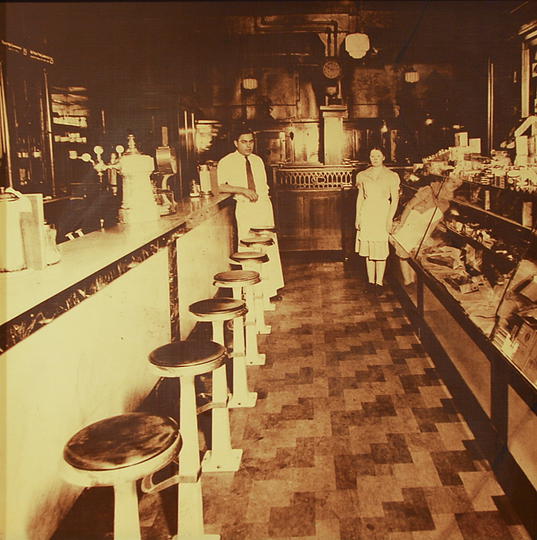