As I have previously reported, the Seddiqi Brothers, Alex and Wally, owners of 70 Down, are gradually transforming their place from a very popular Thursday-through-Saturday urban-hip after hour’s club to a more mainstream Middle Eastern bistro.

Now, with the help of very talented local entertainers, 70 Down is also a jazzy, R&B dinner club on Friday and Saturday evenings. Just last night, I stopped by around seven-thirty and stayed to watch Errol Fisher and the Errol Fisher Band play a great set until ten.

Back in the day, in the 70s and 80s, Errol owned and operated a very successful dinner jazz club. Appropriately called Errols, it was located on Richmond Street East, near the then-legendary jazz place The Montreal Bistro. In my younger days I used to hang out at Errols, who of course would perform regularly at his own club.

Errol was awesome then. He is still awesome now.

It was great to see and hear the incomparable Errol Fisher go “old school” and sing some memorable James Brown, Marvin Gaye, and Bob Marley’s “Jammin.” Ya, Mon! Joining the party were some of Errol’s long-time woman friends, and we danced away the night to Errol’s voice, superbly backed by Larry Gould on guitar and Jeff Beauchamp on bass.

The evening was magic.

Errol and the Errol Fisher Band play every other Fridays at 70 Down. A very talented and amazing entertainer, it is a show definitely worth checking out. 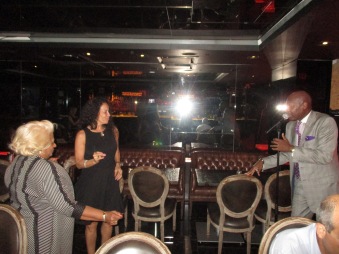